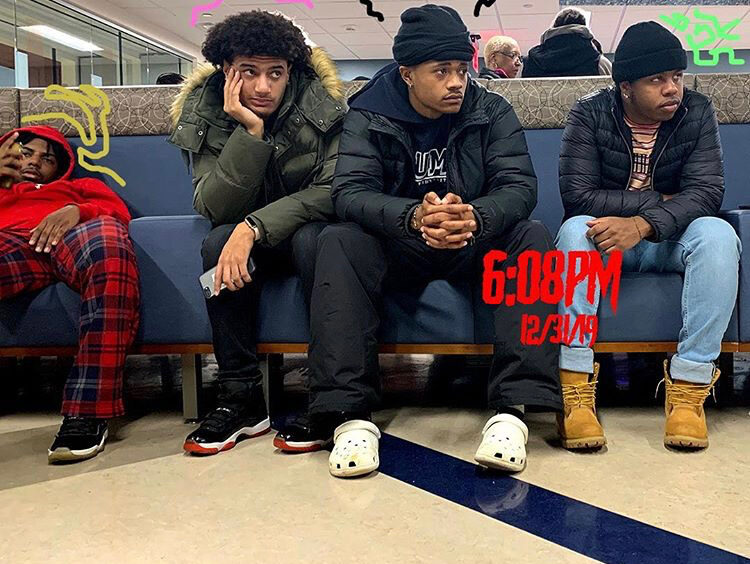 “The pain and the slight echo of the first line of Maady Wrld set the tone for the rest of Roddy’s E.P. He is coming to terms with the death of his friend Samaad “Maady” Frazier but in doing so it lit a fire in him that was unforeseen. The beginning of the song matches this emotion.

The first half of the song starts off very slow with no beat, just a slight melodic hum the lyrics show the aftermath of his friend’s death (“Shit got different, it got worse. Watch them close em up they put my boy boy in a hearse”). After telling the world how important his friend was in the first half of the song, the second half shows his anger and aggression towards the situation with the line. “That night (That night), Niggas was clutchin and steamin.”

FivesUpRoddy turned his sorrows into art and in doing so, set the tone for the rest of the E.P and made his footprint deep into the early stages of his career.”-Genius.com

VERSE 1
They killed my lil bro Maady
Shit got different, it got worse
Watch them close em up they put my boy boy in a hearse
Never would’ve thought at all I’ll put you on a shirt
Stayed an extra hour watched them put you in the dirt
We dropped some extra flowers so we there with you
And whoever talking down we take it personal
I swear these days is getting harder
Played the streets like it was Harvard
With no chance to be a father
In these streets, you was a scholar
Since December 31st it’s been my worse days
They should’ve never caught you lacking in the first place
If it’s a race to get them ‘suckas I’m in first place
Don’t try to keep up with my moves just keep yo own pace
If I could trade the shoes I’ll have them on the right trace
And you always movin different, had your own taste
It’s growing weak if it ain’t never have a strong base
Don’t even pray but I bow my head and say a grace
Uh
Multiple time for multiple lives
On the outside I be chilling, I’m dying inside
If it wasn’t for my sister I’m gripping this nine
It’s a quick and easy drill I could make it a vine
And they think that I be chilling I’m crazy bout mine
If it’s some boo I promise you could get smoked for a dime
And don’t think that I be cappin’ it’s facts in these lines
Maady I swear that I’m focused it’s a bag on my mind
If life ever gives me lemons I’m squeezing this lime
I been bugging back to back ‘Ima stay in my prime
I don’t care what they be on it’s always your time
And it’s easy, you could def see the pain in my eyes
See I tried to be nice
Never had the chance to help you I give the greatest advice
We forever stay tight
Always did right but it was something different that night

VERSE 2
That night (That night)
Niggas was clutchin and steamin (facts)
I just sat and close my eyes just to wish I was dreaming
Talking that hot I won’t let em, in battle the nose be hot like a skillet (facts)
Stay on my pivot we spinning the block so we letting it fly till we get em (Maady2Up!)
See ‘em that’s a vendetta (2UP!)
20 thou’ for this leatha’ (2UP!)
Louis V on the sweata’ (facts!)
But wit’ me she get wetta’ (facts!)
Back to back like it’s knock out (huh)
Mask on when we rock out (bow!)
Guns blaze when we pop out (Gdddd)
Mission done when we clock out
See when it’s me I get crazy brazy
Popping out with yah lady baby (come here)
Drop the top on the ‘Cedes maybe (come here)
Keep it up with the bullets Brady
Roddy just always be tweaking (facts)
Keep the ‘tooly top steaming (facts)
Got the ‘tooly top beaming (facts)
Make his body rock leaning (Gdddd)
See
Niggas don’t know how I come up, wait up
It’s a shop how I spray up (What?)
Coming up how I weigh up (What?)
Like a pro, she wanna’ lay up (facts)
All night till the day up (facts)
Every night ima stay up (facts)
Every shoota’ ima pay up
Keep it up we throw K up